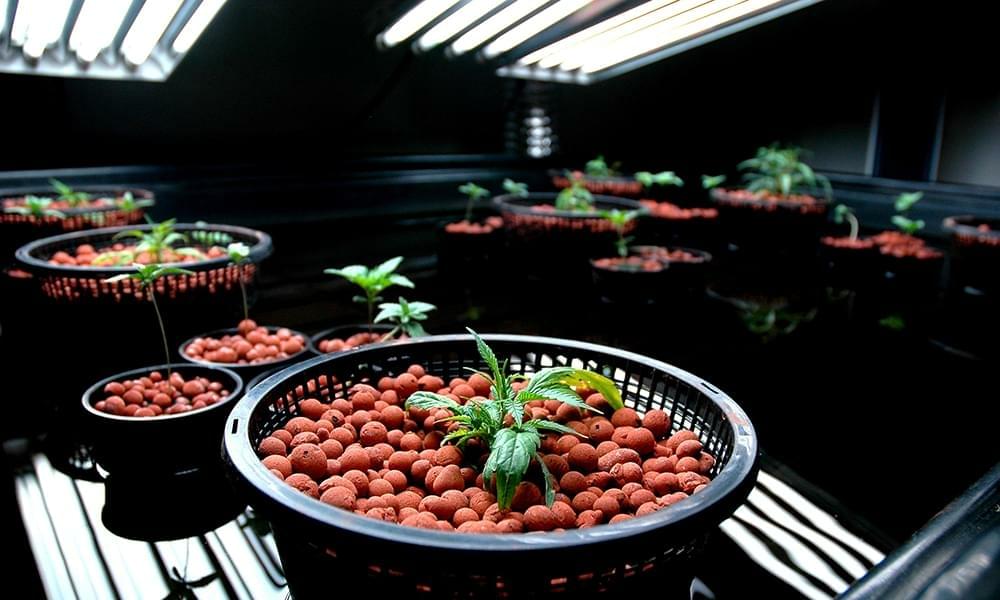 Growing your own weed has never been easier. Thanks to rapidly expanding legalization laws across the US and the 420-friendly garden supply industry that has sprung up in states that allow home grows, more gardeners are going green than ever before. These days, planting your own pot is more like raising tomatoes than starring in a Breaking Bad sequel.

Once you decide to delve into homebound horticulture, you'll find there are a plethora of different ways to grow weed. Whether you're indoors, outside, or in a greenhouse, there are many options you can use to go from seedling to full-flowering bud. While weed is traditionally grown with dirt, water, and sunshine, today we'll be leaving the soil at the garden store and diving into the world of hydroponics.

As you may have guessed from the root word "hydro," hydroponics is all about water. More than just drenching a plant in water, hydroponics relies on pumps circulating baths of nutrient-rich water to feed columns of roots, allowing a plant to thrive without dirt.

Scientists theorize that hydroponic methods have been used in agriculture dating back as far as 600 BC. In the earliest estimations, King Nebuchadnezzar II constructed the Hanging Gardens of Babylon using hydroponic systems. Specifically, it was a massive monument of lush, cascading foliage suspended on top of a structure high above the ground. Researchers also say the technique was used by Aztec farmers in the 10th and 11th centuries.

These days, whether in cannabis grow houses or in your garage at home, the same principles apply as they did in ancient history. Simply add nutrients and oxygen to constantly cycling water, remove the soil, then watch your plants flourish.

Just because hydroponic grow systems operate without the use of soil, doesn't mean that your plants don't need a little assistance. Instead of traditional dirt, hydroponic growers use a number of different mediums to retain water and nutrients in the roots and promote the flow of oxygen. These are the most common mediums for growing weed without soil:

Clay is one of the most popular mediums used to grow weed in water. In pellet form, clay is able to cradle the plant while retaining nutrient-rich water for the roots while still allowing enough oxygen flow to let the plant breathe.

Made from ultra-thin threads of processed rock, Rockwool is another useful tool for growing weed in water. Like clay pellets, Rockwool is great at retaining water while providing enough room for oxygen flow, making it a perfect and long-trusted replacement for soil for growing weed. Unlike clay pellets though, Rockwool must first be PH treated before it can properly house pot plants which, adding an extra layer of labor to the hydroponic process.

An all-natural medium for plants that grow without soil, shredded coconut fibers let in more oxygen and retain more water than rock or clay. As a result, coconut fibers are yet another trusted method for how to grow weed in water.

How to Grow Hydroponic Weed

Once you've done your research and selected the right medium for your hydroponic grow, the next step is picking the perfect hydroponic system for your personal situation. With thousands of years of history, there are plenty of different ways to grow weed in water. But if you're wondering how to grow hydroponic weed at home, there are a few tried and true systemic methods that most small-scale growers rely on for propagating a plant that grows without soil.

In all hydroponic growth methods, the planting system is separated into two different water tanks; one for your plants, and another for a larger reservoir that holds nutrient-rich water. It also contains a water pump to circulate and air pumps to add oxygen. Once you've got the basics covered, the best grow setup for your situation will depend on how much space you have, how many plants you want to grow, and the resources available to you. These are some of the most popular systems for how to grow hydroponic weed:

The cheapest and most simplistic system to set up at home, Deep Water Culture grows are often the easiest way to grow hydroponic weed on your own at home. Consisting of a grow tray that houseshousing individually potted plants suspended in your chosen medium, the system uses a drip line of nutrient-rich, oxygenated water to circulate plant food from a larger reservoir tank. Because each grow pot has holes in the bottom, the water is eventually filtered out of the roots and growing medium and then carried by another hose back to the reservoir, where it is eventually recycled. As long as proper amounts of nutrients and oxygen are added and the water is able to cycle freely, your pot plants will thrive in a DWC system.

In an attempt to replicate the natural movement of the tides, Ebb and Flow hydroponic systems use intervals of soaking and draining to feed and water the plants instead of a steady stream of flowing water. Using the same reservoir and grow tray separation, the Ebb and Flow system operates in cycles of all-or-nothing feeding. This results in a flooding of the plant and its roots with nutrient-rich oxygenated water for an extended period. Eventually, it will use gravity to drain, giving the plant maximum amounts of oxygen before the water is recycled and the plant soaked again the next day.

A slightly more complex version of the Deep Water Culture, the Nutrient Film Technique typically uses a tilted round PVC tube with holes drilled in to house each plant. Nutrient-rich oxygenated water is then pumped from a reservoir tank into the top of the PVC pipe, where it then flows down the tube, passing by all of the roots before it is funnelled back into the reservoir.

No matter what system you use for your hydroponic home grow, it's important to make sure that your reservoir water is mixed with the proper nutrients in the right quantity. Because while growing weed in soil comes with built-in nutrients, growing weed in water requires the gardener to fine-tune the plant-feeding themselves. And if you're growing weed without nutrients, your plants won't be alive very long.

Luckily, with the legal weed industry growing so quickly, ready to use, pre-made hydroponic systems and premixed cannabis nutrients are easier to buy than ever before. If you have a green thumb, then you can grow weed in water like a seasoned pro. Is hydroponic weed better you ask? Just like all cannabis growing methods, the most important ingredient is still attention, attentiveness and a hefty heaping of love!

Have you tried growing hydroponic weed? Do you like it better than soil-cultivated weed? Tell us your experience in the comments below!