How Many Ounces are in a Pound? 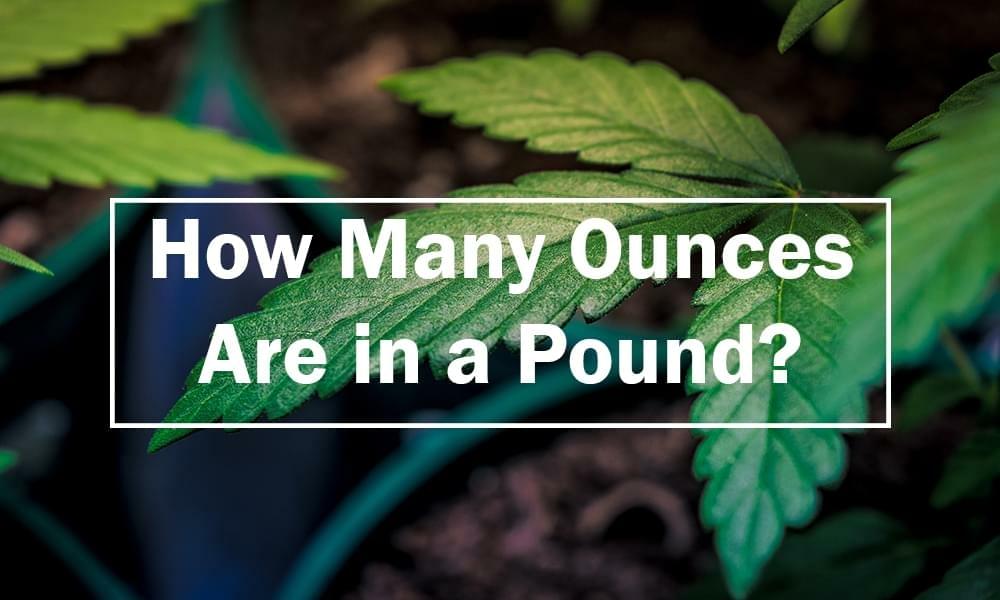 The ability to walk into a dispensary and legally purchase cannabis for medical or recreational use is a beautiful thing. It's like being a kid in a candy store. Except you are an adult and you want to make sure that your eyes don't get too big and you end up making purchases that you regret. The options of marijuana strains and marijuana products can be intimidating, especially if you are making your first cannabis purchase or are unfamiliar with the terminology and the process. If you are in the market for flower, knowing how weed is measured and what quantities relate to what amounts is critical to leaving the dispensary satisfied that you made your purchase wisely. If you haven't realized it already, your fifth-grade teacher was right: math is everywhere.

Let's take a look at the standard quantity breakdowns for flower - how cannabis is weighed out - so that you are familiar with the key units and metrics and your next trip to the dispensary is worry-free. Remember that measurement procedures change as the weight of the weed gets heavier. Your grams will begin to turn into ounces and your ounces into pounds.

It all starts here! This is the base measurement for weighing weed and it's the smallest amount you will be able to purchase at a dispensary. In fact, it might even be too small an amount to purchase. While you can still buy a gram of certain types of weed at most dispensaries, the industry is moving toward minimum weights of 1.75 or even 3.5 grams as the smallest amount available.

What does a gram of weed typically cost?

Grams of weed can range from $10 for low-end herb up to $25 for hard to find top-shelf strains. Note that prices will vary depending on the state and whether or not you're shopping recreationally or medically.

A gram is also known as:

A "dime bag." This term harkens back to when cannabis was illegally purchased and the street standard was $10 for one gram.

The next common measurement of cannabis is an eighth. This is a great option to try a new strain to ensure you have enough flower to pack a few bowls or roll 3-4 couple of joints.

How many grams are in an eighth of weed?

What does an eighth of weed typically cost?

Depending on where you buy and the quality of flower, eighths can be purchased for as little as $20 and as much as $60 or more for top-shelf strains.

An eighth is also known as:

A quarter of weed is great for people who know what they want (i.e. a quarter of one strain). At this quantity, you'll see better price breaks which is a great way to save money in the long run. If you know you're going to be consuming a decent amount of weed (or like to use some to make edibles, etc.) then this is a great way to go!


How many grams are in a quarter of weed?

What does a quarter of weed typically cost?

Quarters can range between $40 and $100 depending on strains and the quality of bud trimming (and what state you're in).

A quarter is also known as:

Ounces are for the frequent consumers for obvious reasons. This is the largest measurement that you can buy from a dispensary (recreationally; typically more if you're a MMJ cardholder) and when you'll see the biggest discounts. Some dispensaries will let you mix and match strains to hit the ounce price break, which makes for an excellent opportunity to try a large variety of flower.

How many grams are in an ounce of weed?

What does an ounce of weed typically cost?

Due to the large variety of strain options, ounces can range from $99 to over $400. Again, dispensaries usually offer discounts for buying this much marijuana (it's the most that can be purchased legally at one time in states such as Colorado where recreational use is legal), but a typical ounce of high-quality cannabis should cost around $250.

An ounce is also known as:

If you're shopping recreationally, you will not be able to buy this much weed in a dispensary. Having said this, many medical dispensaries do allow higher purchase amounts for medical marijuana cardholders, which makes a quarter-pound a decent option for those who need frequent medicine.

How many ounces are in a quarter pound of weed?

A quarter-pound is also known as:

Similar to a quarter-pound, a typical recreational shopper will not be able to purchase this much weed from a dispensary. Depending on where you live, medical marijuana cardholders can often make a half-pound purchase.

How many ounces are in half a pound?

A half-pound of weed is also known as:

How many ounces are in a pound of weed?

Suffice to say, a pound of marijuana is a lot of cannabis. If you are lucky enough to have a pound of weed you are probably using it for medical reasons, growing it or looking to distribute it - hopefully legally! Separating this amount of product (16 oz. of weed!) into smaller units will put your math skills to the test.

A pound of weed is also known as:

As mentioned above, not many people are sitting around with a pound of marijuana at their disposal. Nor should they. Working with smaller amounts will keep the cannabis fresh, tasty and potent. Joints usually only have 0.3 - 1 gram of weed. Packing a bowl for personal use will rarely use more than 0.5 of a gram. Even if the goal is to roll the fattest blunt you've ever seen it shouldn't require much more than an eighth. How much weed is in an eighth? That's right. 3.5 grams.

Have you ever been intimidated or confused about measurements when purchasing marijuana? Do you have any funny stories to share about the experience? If so, take a second to let us know in the comments section below.